FoldIt (part I): From trauma to awe, an (ex-) graduate student’s perspective

Okay, I have to say from the outset, I haven’t actually played this game.  My doctoral thesis involved folding proteins.  Literally.  I’d grow vats of bacteria to express my darling little protein (little known fact: bacteria in vats form an evil borg-like collective consciousness bent solely on making graduate students routinely trudge into lab at 4 a.m. anyway.) Then, I’d purify this protein.  Many liters of stinky bacteria and several days later, I’d end up with about 500 microliters of protein (a thimble would be like a bucket, for comparison), which  I’d immediately destroy.  Actually, I’d denature it so that it unfolds. Same thing, sorta. I’d then dole my beaten protein out into tiny, drop size dialysis buttons and drop it into various solutions to find the environmental conditions that would resuscitate it, which is to say, cause it to fold back up into the nice, functional protein it once was.  In those rare conditions where the protein didn’t just turn into useless globs, I was left with the task of putting franken-protein through various tests, all of which gradually, over a long period of time, told me absolutely nothing useful.  Don’t ask the purpose behind all this, I have repressed it deeply.  All I know is the mere words ‘protein folding’ give me a quiet shiver of heebie-jeebies.  I’ll need therapy before I can approach this game without heart palpitations and an impending sense of doom.

Which is precisely why I appreciate the remarkable accomplishment of this game.  A little background: proteins are the basic building blocks of life.  While DNA may be the blueprint, proteins are the workhorse molecules that constitute the bricks, mortar, timber, levers, pulleys, transport system, communication system, and, well, the list goes on.  From muscles to enzymes to immunoglobins to channels to receptors, it’s all about the proteins.  Fabulous little things.  And more remarkably, they are made entirely from amino acids—only 22 different ones—strung together into long chains.  The remarkable power of proteins arise because different sequences of amino acids ‘fold’ into three dimensional structures, creating all the various little molecular machines and tools life depends upon.  And few things in modern biology are as important as the structure of these little molecular wonders.  It’s their shape that allows them to latch onto and destroy a virus, allows them to respond to medication, allows them to transmit signals through the brain.  And it is often mis-shaped versions that lie at the root of many diseases and disorders.  It’s hard to overstate the importance of figuring out the shape of these molecules to modern science.

Unfortunately, it’s also a major headache.  You can’t see a protein. No one can. Ever. (well, not yet anyway). It’s just too small.  So to figure out what these molecules look like, scientists form them into crystals (often a major challenge itself, and sometimes not possible) and then bombard these crystals with high-powered x-rays.  These x-rays, in turn, scatter when they hit the crystal and create a defraction pattern on a collection device.  Some poor sap of a graduate student, then, has to take this incomprehensible pattern of dots and ask “what kind of 3-dimensional molecular structure repeated in a crystal would interfere with x-rays and cause them to scatter in such a way as to create this incomprehensible pattern of dots?” (eg., of incomprehensible pattern of dots below). This requires computer algorithms and all sorts of fancy mathematics from historical characters such as Fourier, Ewald, Laplace and lots of talk of space transformations and so on. 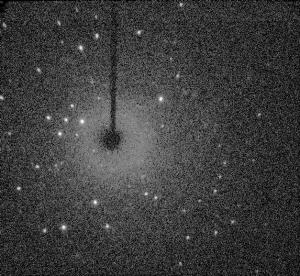 Obviously, it’d be simpler if you could just look at the sequence and deduce from the order of the amino acids what the folded structure of the protein would be.  As it happens, scientists and all their computer algorithms have been notoriously bad at this.  Basically, they just get it wrong more often than not.  Enter FoldIt.  Nevermind all the excruciatingly complex mathematics, physics, chemistry.  Make it a game.  Forget the graduate students, let people from all walks of life with no scientific training whatsoever solve the problem.  And they did (well, they solved some recalcitrant structures).  It’s hard to overstate how profound this is.  Perhaps with the exception of obscure theoretical physics and arcane multi-dimensional mathematics, few subjects are as complex and opaque as the rules by which electrons and proteins tethered in a chain decide to arrange themselves to be energetically happy.  And yet individuals with (at least initially) no whiff of understanding of this complexity managed to do what has eluded many of the brightest minds in modern science.

What lesson to draw from this?  Not that scientists are stupid, certainly.  Scientists working in this field are some of the brightest, most talented minds around.  Neither a vague assertion to the power of ‘crowd sourcing.’  That’s too facile and fails to explain anything.  The magic is not in the numbers (indeed, only a small percentage of players actually contribute to the structure solutions).  What I think this speaks to the type of intelligence that is deployed in exploring a ‘solution space’ of immense proportions.  What, in short, I find remarkable about FoldIt is the way in which it highlights the difference between machine and human intelligence.  Exploring this idea and its implications will be the subject of the next blog.

On a personal note, writing this is bringing about catharthis.  I’m wondering if I can use FoldIt to defeat my arch-nemesis from graduate school: the C1b region of type-7 adenlyl cyclase, a treacherous chain of 95 amino acids that dragged me into the lower rings of dissertation hell. Hm.